Straw Horse?  How About, Straw Herd??

“Long before Sanford Weill suggested last week that big banks should split up, Bank of America executives and directors considered the idea and then decided against it, said people close to the nation’s second-biggest bank by assets.”

So, there you have it:  Bank of America’s board of directors has already studied the question of whether big banks can 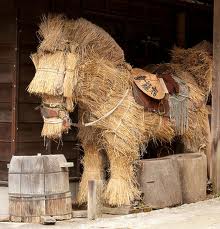 feasibly be broken up, and decided “thumbs down.”

One.  Whoever said that breaking up Too Big To Fail Banks (“TBTF”) was in the banks’ interests, or thought they would break themselves up voluntarily?

Clearly, breaking up these out-of-control monsters isn’t in their interests — it’s in everyone else’s.

Two.  Can you say “zero credibility?”

That would be the amount of shareholder value destroyed at Bank of America just since 2008, thanks to disastrous bets on the housing market, plus ill-fated acquisitions of Countrywide and Merrill Lynch, etc. — all exacerbated by obscene leverage and abetted by government regulators.

That’s in addition to — depending on how you count — either tens of billions or hundreds of billions in federal bailout funds, guaranties (explicit and implicit), and not-so-stealth subsidies like ZIRP (“Zero Percent Interest Rate Policy”).

If these guys said the sky was blue, you’d want a second opinion . . .