Once you get past the odd, equal billing on the book jacket — I’m told the publisher rejected 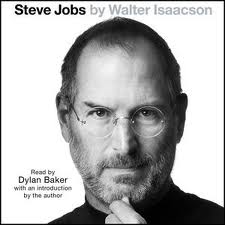 The ultimate praise (from me, at least):  I’m going to read it again (I just finished).

My favorite quote, from dozens of memorable ones:

Was Steve Jobs smart?  No, not exceptionally.  Instead, he was a genius.  His imaginative leaps were instinctive, unexpected, and at times magical.  He was, indeed, an example of what might be a called a magician genius, someone whose insights come out of the blue and require intuition more than mere mental processing power.  Like a pathfinder, he could absorb information, sniff the winds, and sense what lay ahead.

Too big to fit on a tombstone, too brief for a eulogy — but it captures Jobs’ essence perfectly.