“Wagner’s music is better than it sounds.”

“Who are you going to believe — me, or your own lying eyes?” 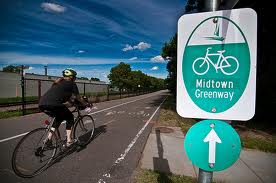 purports to tell home buyers (and renters!) how walkable a given neighborhood is, is beta testing a sequel:  “bike score.”

The site also ranks the “most bikeable” cities in the U.S. and Canada.

Minneapolis, with a score of 79, blowing past runners-up Portland and San Francisco, both tied at 70.

That comes on the heels of Minneapolis being crowned “America’s Best Bike City” by Bicycling Magazine last year.

Reviewing the Reviewer, or, “Psst!  I’ve Got an Easier Way to Tell”

While I’m not prepared to announce that bike scores are a bust ala QR, or “Quick Response” codes (see “S-P-L-A-T!! The Next Big Thing?  Not Yet“), I don’t exactly see them lighting the residential real estate world on fire, either.

That’s based on what I’ve observed with my Buyer clients, as well as my own sense living in an urban neighborhood in Minneapolis (near Cedar Lake, a few miles southwest of downtown).

So, if you want to see how walkable a neighborhood is . . . look for pedestrians.

If you want to see how bikeable it is . . . look for bicyclists (or the next best thing, a bike-share kiosk, pictured above).

The only two caveats to the above:  1) Minneapolis has an extensive skyway system, so the best place to look for pedestrians downtown is on the second floor; 2) negative wind chills, like we’re prone to locally, put a serious damper on outdoor activity.