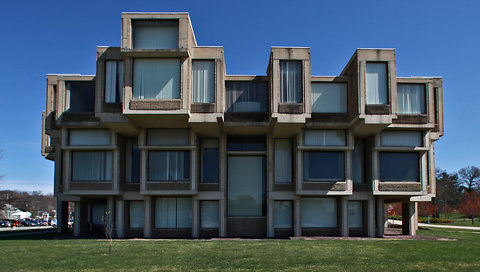 Sometimes a rose is just a rose, as Gertrude Stein knew.

And sometimes, an old building is just that — not architecturally significant, and certainly not worth an exorbitant amount to renovate and bring up to modern standards.

In a nutshell, that’s my reaction to a provocative NYT article, “Are Some Buildings Too Ugly to Survive?”

The subject of the debate is a county building (above) in Goshen New York, that appears to be suffering from deferred maintenance, functional obsolescence — and the fact that it’s, well, just plain ugly.

“Brutally” ugly, one might say (apparently, that’s the name of the 1950’s architectural movement that spawned it).

Putting Their Money Where There Mouth Is

I certainly know of gorgeous old buildings that were torn down by avaricious developers and replaced with . . . drek.  (Exhibit A:  New York’s magnificent Penn Station, demolished in 1963).

But, I’m also aware of ugly, obsolete buildings that no one can touch — and, if it’s a public building, afford to fix — just because it

happens to be old.

At least in close cases (and I’m not sure the Goshen building is), my instincts are to defer to the local authorities and the communities they represent.

They’re the ones actually living with and using the building — not some New York City architecture “poohbah.”

And they’re the ones who’ve got to come up with the dough to update — or replace — it (in this case, replacing it is apparently vastly cheaper).

Or government appraisers who slap a ridiculously high valuation on a home.

Unless they’re prepared to actually buy it for that amount (or know someone who is) . . the number is meaningless.