Like fine wine, some movies just get better with age (“It’s a Wonderful Life,” from 1946).

And then there’s “Die Hard,” Bruce Willis’ action flick from the late 1980’s.

What accounts for the difference? 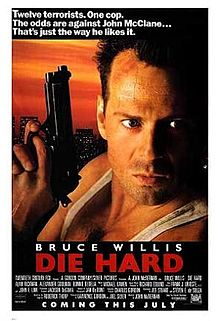 accounts for a lot of it.

Specifically, any movie that’s based on technology and special effects is inevitably going to look dated, faster than a movie that’s story-driven and showcases — there’s no getting away from it — good acting.

I think it’s also the case that some eras simply hold up better than others:  how else do you explain the fact that the hairstyles in “Die Hard” look hopelessly dated (did everyone, male and female, use a blow comb back then?) while the 1940’s-era actors in “It’s a Wonderful Life” look normal.

But, inevitably some of it is just random, and depends on which scenes and backgrounds are integral to the movie.

So, imagine how ridiculously dated the following seem today:

–An off-duty cop on a plane who’s (very casually) carrying his weapon.

–An airport full of people smoking — but nary a cellphone in view.

—Speaking of cellphones . . .  terrorists who disable an office building’s communications by cutting its phone lines.

–A Japanese tycoon running a world-beating Japanese global conglomerate (today, it would be Chinese; if you don’t remember, the Nikkei was skyrocketing in the late 1980’s).

In fact, there is something — or should I say “someone” — from “Die Hard” who holds up very well:  a young Alan Rickman, who plays the villain, wielding the sneer and imperious attitude showcased so well in the later Harry Potter movies.

P.S.:  Unfortunately, any movie that features terrorists, a trashed skyscraper and people falling out of same — no matter when it was made — is now going to evoke images of 9/11.

And if you’re looking for something that dates “It’s a Wonderful Life,” it would be the cars, Family Room record players (vs. wall-mounted plasma TV’s), etc.