Playing Housing Market Arbitrage, or,
The Substitution Effect to the Rescue

I don’t know about anyone else, but I see an imminent collision — the good kind — between what’s happening in the rental market and the “For Sale” market.

In the Twin Cities and nationally, rentals are scarce — and getting scarcer. 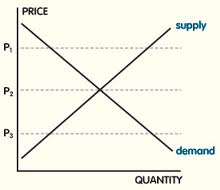 In the last few weeks, I’ve seen rental vacancy rates quoted anywhere between 1% and 3%, depending on the part of town (the two downtown’s are tightest).

As a result, landlords are poised to raise rents — or already have.

Meanwhile, in the “For Sale” market, the lower brackets continue to be dominated by bank-owned foreclosures selling at deeply discounted prices.

Even with skittish Buyers and a soft economy, at some point the gap between what rentals fetch and For Sale properties can be had (and subsequently rented) for is going to ignite demand — if not from owner-occupants, then from investors.   (Economists call this phenomenon a “substitution effect”.)

Demand from investors can only be stimulated by what’s happening with interest rates (flat-lining) and equities (trampoline? bungee jump?).

In fact, there’s plenty of anecdotal evidence that an overheated rental market is already starting to light a fire under the lower end of the housing market.