From the Mouths of Babes

[Editor’s Note:  my blog posts the past week have more been more intermittent — and spiced with NY anecdotes — because I just returned from there.  Memo to self:  put away the sharp elbows and aggressive driving (adaptive in NY, but out-of-place in the more congenial, laid-back Midwest.]

Compiling an exhaustive list of all the things that New York City has (not all good, by the way) that the Twin Cities doesn’t would take a very long time.

Ditto for the reverse. So, here’s just one example:  New York grocery stores don’t offer free samples the way that Byerly’s, Costco and other local groceries do.

Because they’d be cleaned out — not just by homeless people, but by customers not respecting the honor system and otherwise taking advantage (my paraphrase).

Giving credence to my son’s theory:  Manhattan’s the only place where self-serve yogurt stores (pictured below) dispatch an employee to monitor how much customers are taking.

By contrast, when I’ve been in such stores in the Bay Area, Phoenix and elsewhere, the honor system rules.

P.S.:  Oddly, I’m not aware of any self-serve yogurt stores in the Twin Cities yet (see, “Yogurt Chains Give Power to the People“).

Maybe too many Dairy Queens??  (The Twin Cities is their headquarters.) 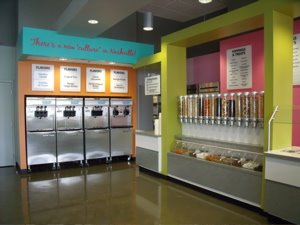