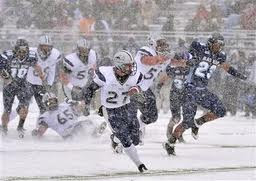 Not everyone in the Twin Cities is put out by the second major snowstorm in barely 10 days (the Dec. 10-11 blizzard dumped up to 20 inches locally, the most in 19 years!).

10. Kids who just got new sleds — or are getting them Christmas day.
9. Local ski hills (yes, the Twin Cities has several).
8. Snow blower makers and the retailers who sell them — several of which are reportedly sold out.
7. Restaurants, bars, and pay parking lots near TCF stadium, host to the University of Minnesota football team — and tonight’s Vikings – Bears game, thanks to the collapsed Metrodome roof.
6. Snowplow services in the Twin Cities looking for more business.
5. Chiropractors whose business has spiked treating snow-shoveling aches and pains.
4. Makers of winter clothing.
3. Outdoor ice skating rinks.
2. People who like snowball fights.
1. Lobbyists for the Minnesota Vikings, who are pressing hard for a new stadium — presumably, an indoor one.