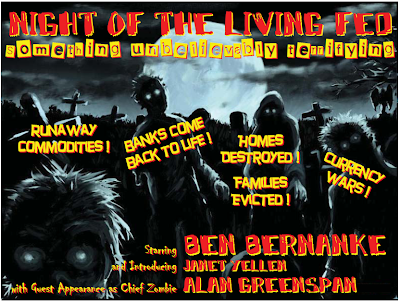 
The Federal Reserve’s asymmetric policy of stimulating stock moves by setting artificially low rates and then leaving the bull markets, when overstimulated, to bubble over, is dangerous. It is probably the most dangerous thing to inflict on a peace time economy with two possible exceptions — runaway inflation and a housing bubble.

Leave it to Jeremy Grantham to lay bare exactly why the Fed has so many market watchers — myself included — baying at the moon in exasperation.

On the one hand, it denies any duty or ability to contain the damage from asset bubbles (or even recognize them!).

Grantham devotes most of his current quarterly letter (see, “Night of the Living Fed“) to explaining why this is irresponsible, and — in the case of housing — especially dangerous.

Amongst other things, in their wake burst asset bubbles leave squeezed consumers, taxpayers, savers, retirees, pension funds, states, and municipalities — and, when they are compelled to clean up the mess, ultimately a broke Fed and federal government.

Distorted asset prices have been like the deliberately misplaced signal lanterns, which the Cornish, in the stormy west of England, used to lure ships onto the rocks for plunder. Individuals, as well as institutions, were fooled into believing that the market signals were real, that they truly were rich. They acted accordingly, spending too much or saving too little.

So what does Grantham prescribe, besides not inflating any more bubbles?

Noting on the one hand the “army of non-frictional unemployed ready to get to work,” and on the other hand the country’s “dreadfully deteriorated infrastructure and desperate need for improvements in energy efficiency” . . . Grantham thinks it’s obvious.

You owe it to yourself to read the entire article.