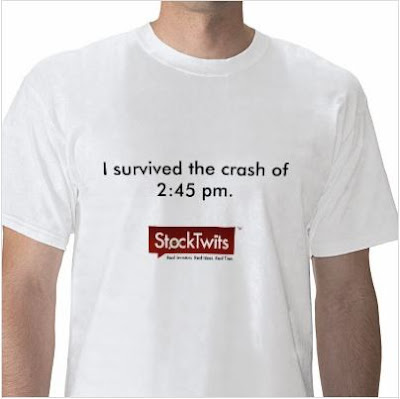 Imagine a beef processor that was linked to an e.coli-tainted shipment that ultimately killed 100 people.

A week after the outbreak, the authorities were still trying to determine how e.coli got into the beef processor’s facility.

In the meantime, the facility was operating “normally,” and continuing to process and sell beef to all its usual customers.

Of course, in the real world, none of the above would have been tolerated.

Now compare that with what has happened on Wall Street after the major stock averages did a 10% bungee jump in the span of 5 minutes on May 6.

While the SEC and various stock exchanges look for a culprit, the exchanges continue to trade, “normally,” with no change in their structure or business practices.

P.S.: would it be bad form to point out that the “crash survivor” is missing something? Like his head??