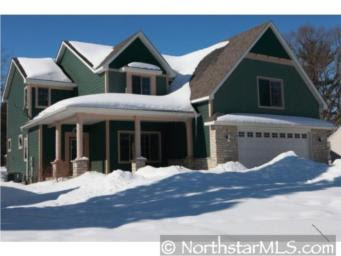 What’s Wrong With This Picture?

You don’t know who’s swimming naked until the tide runs out.

So, what’s wrong with this Minnetonka home (pictured above)?

That is, besides that fact that the front (and most important) photo on MLS looks like the home is stuck in a winter time warp, and it’s now almost May.

I just showed the home, and it’s very impressive.

So what is it, then?

The rest of the block.

Whereas this home, built in 2006, is selling for $649.9k, all the other homes on the block are easily 50 years older, less than half the size, and worth hundreds of thousands less.

This home — and hundreds of other homes like it in the Twin Cities — was built in 2006 at the height of the market.

At the time, homes were appreciating 15% annually, and the sky was a(n almost) cloudless blue.

Developers were getting ever-more aggressive putting up “spec” homes, venturing from “sure bet” neighborhoods to ones (like this one) where prevailing home prices were dramatically lower and nothing had turned over yet.

Their thinking, no doubt, was that the whole block was a candidate for redevelopment, and that their smart, new home would soon be surrounded by other, similar homes.

For now, this is the only new home on the block.

From the street, it’s hard to escape the image of a beached whale, now stranded a long way from the receding ocean.