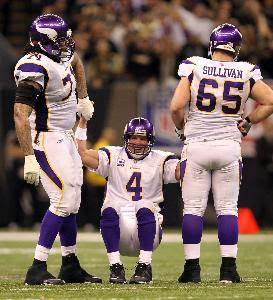 The Agony of Defeat (Again)

I tell non-Minnesotans that the *saddest days I recall growing up in Minnesota, in order, are:

Heretical as this may sound, after witnessing all the fumbles yesterday, I was secretly even a bit relieved: it’s hard to imagine the team matching up well with an even stronger Indianapolis Colts team in Miami in two weeks.

Losing the NFC championship game (again, for the 5th time) is a bummer; losing a 5th Super Bowl would have been a very big bummer.

At least we’re still tied with the Buffalo Bills at four.

*The Vikings’ loss to the Atlanta Falcons on January 17, 1999 in that year’s NFC Championship game also makes my personal “top 10” list (even though I was living in Manhattan at the time) because: a) they were heavily favored, and would have had a good shot at winning the Super Bowl if they’d gotten past the Falcons; and b) it was my wedding day, at the Puck Building in Tribeca (a Manhattan neighborhood).

At least all the (relatively) glum, Minnesota faces weren’t an omen: my wife and I just celebrated our 11th anniversary last Sunday (the Vikings’ win over the Cowboys), and have 3 kids.