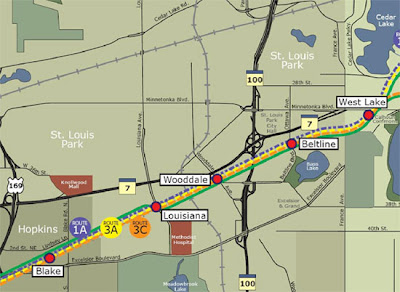 Bullish on the Light Rail Corridor

Just because I don’t make market calls (“How Clear Are Realtors’ Crystal Balls?“) doesn’t mean that I don’t give clients input — and lots of it — regarding neighborhood trends, prospective development, and the like.

A good example of that is St. Louis Park and the light rail corridor.

Though the route is not yet finalized at the north and south ends of the line, the three stations proposed for St. Louis Park — Beltline, Wooddale, and Louisiana (pictured above) — are not expected to change.

In fact, anyone who’s driven Highway 7 lately will notice that the site of the future Wooddale station is already being prepared.

Everything else being equal, one would expect that housing near these stations will benefit as the light rail line comes closer to becoming a reality.

P.S.: one of economists’ favorite terms is “ceteris paribus” — Latin for “everything else being equal.”

As in, the variables baked into economists’ models are valid, ceteris paribus — which of course it never is.