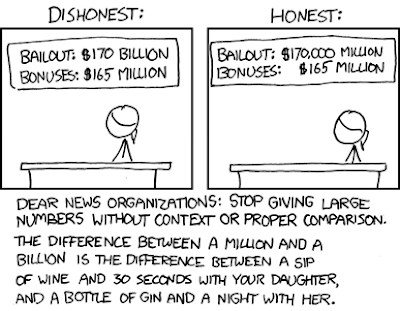 If you’ve been out of the loop the last 48 hours or so, the big finance-related news is the political firestorm precipitated by AIG’s bonuses, and the Fed’s decision to create $1 trillion in new money (by buying mortgages and mortgage-backed securities).
On the blogosphere, there is a quick consensus emerging that the the public, led(?) by Congress, is missing the point (or more accurately, the forest for the trees).

In this case, the $165 million in bonuses are the trees; the $170 billion — immediately paid out to the likes of Goldman Sachs and Merrill Lynch — is the forest.

Michael Lewis puts it this way: ‘the complexity of the issues at the heart of the crisis paralyzes the political processes’ ability to deal with them intelligently. I have no doubt that, by the time this saga ends, we will all know what happened to every penny of that $165 million in bonuses and each have our opinion of the morality of it. I doubt seriously we will ever understand the morality of the $173 billion payment that is the far more serious issue.’
While the AIG bonuses are the latest political lightning rod, the real scandal is where all the money given to AIG ended up — and why.
P.S.: thanks to Barry Ritholtz’s The Big Picture blog for the cartoon at the top.
0Shares