There aren’t too many Twin Cities neighborhoods that include both 1950’s ramblers for $300k, and less than one mile away custom, upper bracket Contemporaries with gorgeous views of Cedar Lake and the Downtown Minneapolis skyline commanding almost 10x that.

The latter home would be 2545 Huntington (pictured above), which fetched $2.46 million almost one year ago after previously selling for $3.5 million in 2015 (note: the property actually includes two structures — a primary residence and a guest house — connected by its own enclosed skyway).

Also known as the “First Alphabet,”** Fern Hill is bounded by Minnetonka Blvd. on the south, Highway 100 on the west, France Ave. on the east, and the Lake Forest neighborhood to the north.

Its eastern edge, bordering Minneapolis, is increasingly dominated by upper bracket single family homes — a significant number of which are either new construction or recently remodeled.

By contrast, the smaller homes near Fern Hill’s western boundary, Highway 100, date to the 1950’s (or earlier).

Depending on their proximity to 100, these homes suffer from a “highway discount” rather than a “lake(s) premium.”

Fern Hill’s other distinguishing feature is its popularity with the orthodox Jewish community. 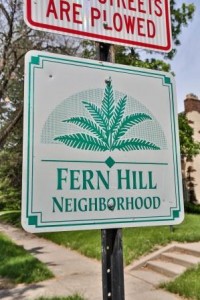 synagogue serves as the school’s overflow parking lot on weekdays).

In general, residents prize the neighborhood for its close-in (but not too close) location; proximity to the Lakes, Uptown, downtown, and the western “burbs; and its sturdy (and increasingly refurbished) post-war housing stock.

Families with school age children also cite its well-regarded public school system, including St. Louis Park High School; and the very popular Park Spanish Immersion School (full disclosure: two of my three kids are at the High School now. That’s also where I went, and all but one of my four sisters).

In fact, at the moment, there are only 3 single-family homes for sale in Fern Hill that aren’t already under contract, and one of those (2905 Princeton) very likely will sell in multiple offers by the end of the week. See, “Days on Market: One (Two-Thirds of a Day??).** Number of Showings: 50+(!).”

Voting With My Feet

So, what else can I tell you about Fern Hill?

I grew up there (at 28th & Glenhurst), and have lived a block away in Minneapolis’ Sunset Gables neighborhood for the last 16(!) years.

Including post-schooling stints at home, I’ve now lived a few decades(!) in and near the area.

Wanna guess who (or what) else is located in Fern Hill?

Technically, I suppose, that makes Fern Hill an “F-to-T” neighborhood, rather than the First Alphabet.

P.S.: One of Minneapolis’ quirks is that Sunset Gables residents (in the city’s southwest corner) are closer to St. Louis Park High School than to the Minneapolis school they (we) are zoned for, Southwest High.

As a result, some families (including my own) opt to open-enroll one or more kids at St. Louis Park.