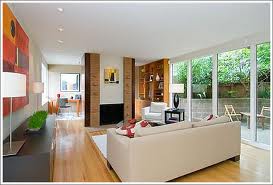 Of course, if any of those architects designed the home, the listing agent would loudly trumpet that fact ” and the home’s list price would likely include an extra zero (or two!).

It’s more of a feel than any particular list of attributes, but I’d include such things as: sleek, spare design; horizontal, almost Prairie-style lines and spaces; 90° angles and what I’ll call “perpendicularity”; a flat or barely pitched roof; recessed lighting; and lots of glass and windows, especially transom windows that show off the tall ceilings.