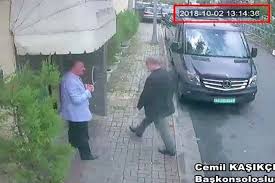 “Res ipsa loquitur” (rayz ip-sah loh-quit-her) n. Latin for “the thing speaks for itself,” a doctrine of law that one is presumed to be negligent if he/she/it had exclusive control of whatever caused the injury even though there is no specific evidence of an act of negligence.

President Trump on Tuesday criticized people blaming Saudi Arabia for the disappearance of journalist Jamal Khashoggi, saying they are prejudging the case.

“Here we go again with, you know, you’re guilty until proven innocent. I don’t like that,” Trump said.

When a patient leaves surgery with a scalpel in his body, he doesn’t need to prove the surgeon was negligent to win a malpractice case.

Rather, thanks to the doctrine of res ipsa loquitur, the burden of proof shifts to the surgeon, who must prove that he wasn’t negligent.

Similarly, when a U.S.-based Saudi journalist enters the Saudi consulate in Istanbul and never comes out, it seems obvious that the burden of proof is on the Saudi government to show that there wasn’t foul play.