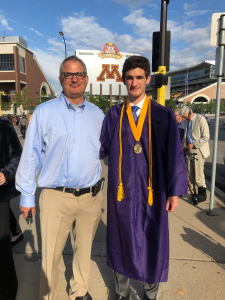 I don’t know about my just-graduated son, but as a parent, one of the things I liked most about Minneapolis’ Southwest High School was the supportive, collaborative culture.

Exhibit A:  this past Winter, when my son and several classmates had their local alumni interview for a certain Ivy League school at a Linden Hills coffee shop.

Unbeknownst(?) to the alumni rep, each student somehow texted at least a few of the interview questions to the classmate following them.

In fact, that selflessness and supportiveness was on display when it came to homework, prepping for finals, sports teams, and almost every other activity at Southwest.

P.S.: The “M” in the background of the photo above isn’t for “Minneapolis” or “Mariucci (Arena),” the site of the graduation ceremony on the University of Minnesota main campus.

That’s TCF Stadium behind us.