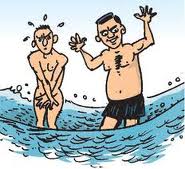 Finding Out Who the Naked Swimmers Are

“You don’t know who’s swimming naked until the tides goes out.”

When stocks abruptly turn south, there are two kinds of Sellers:  those who want to sell, and those who need to sell.

What would make a stock market investor have to sell?

I can think of at least one thing: a margin call.

For the uninitiated, that’s when someone who bought something with borrowed money has to pony up more security (“collateral”) to satisfy their lender.

So, just to pick an extreme example:  imagine someone who went all in on Bitcoin, just as it hit $20,000 per (less than 2 months ago — distant history, I know).

Further imagine that our hapless Bitcoin speculator was so sure that Bitcoin was headed to $50,000, they wanted to leverage their bet — and found someone on Wall Street happy to accommodate (farfetched, I know).

Unfortunately for all the Bitcoin Johnny-Come-Lately’s, that’s not what happened.

Instead, Bitcoin has now plunged in the last few weeks, to around $6k.

Now, all that leverage isn’t speculators’ friend, but their enemy.

As Bitcoin falls, lenders issue margin calls to borrowers to put up (much) more money.

And where do you suppose Bitcoin speculators get that money?

Suddenly, they — and perhaps thousands of others — are forced Bitcoin sellers.

Substitute “stocks” for Bitcoin, and dial down the leverage just a bit, and you may very well be describing today’s market action.

TBD:  just how fierce the stock market riptide is . . . and how many naked swimmers there are.