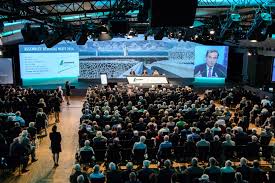 What a Novel Idea! (Actually, Not)

“Two years ago, SurModics Inc. conducted its annual meeting and only four shareholders showed up.

Even though it was held at the company’s Eden Prairie headquarters, there was not a big return for the expense.

So last year, the company conducted a virtual annual meeting ” something more companies are electing to do. SurModic’s board chairwoman, Susan Knight, said during this year’s meeting earlier this month that the company now expects to follow suit every year.”

Who could have predicted online annual shareholder meetings?

Here’s an excerpt from my article in The New York Times:

“Electronic meetings have several advantages over the in-person version.  Companies can dispense with the time and cost to rent a hotel ballroom, and to make and pay for executives’ travel, lodging, and all related arrangements.  Meanwhile, all shareholders ” not just meeting attendees ” can participate, and will have more opportunity to communicate with each other as well.”

Will online meetings ever replace the physical kind?

Here’s what I speculated back in 1994:  “Of course, companies such as Wal-Mart and Berkshire Hathaway, where annual meetings are part of the corporate culture, may never want to phase them out.”

In the 1990’s, I was advising large, publicly-traded companies on how to use the Internet to communicate with shareholders, and editing a related publication called “Off-Line.”