“The U.S. is funding both sides of the war on terrorism.”

“Vuja de“:  the distinct sense that somehow, something that just happened has never happened before.

I saw it first at the St. Louis Park Costco Monday afternoon when I filled up. 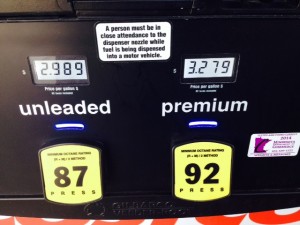 By last night dozens of other Twin Cities gas stations had followed suit.

It seems to me like there are two possible responses to what is — at least for consumers — an unmitigated blessing.

Treat it as an early Christmas gift and spend it on iPhones, eating out, and other indulgences (of course, for those living closer to the edge, any gas savings likely means a little more breathing room . . . paying other bills).

Eventually, though, if cheap(er) gas really persists, it’s easy to foresee the return of Hummers and other gas-guzzling monsters, that will spike demand and ensure the return of (yet) another round of nosebleed energy prices.

Been there, done that.

A vastly smarter (if more disciplined) response would be to slap a federal tax on temporarily cheap gas, and use the money the same way gas-selling Middle East nations do:  strategically, if not as a weapon.

That would be mean undertaking one (or more) of the following:

–Building a truly national network of charging stations to speed the transition to electric cars (President Eisenhower did much the same for gas-powered cars, via the Interstate Highway System in the 1950’s).

Even better:  all of the above.

Opponents will likely decry stricter fracking rules as imposing onerous, additional costs on drillers, who will simply pass any extra expenses through to consumers.

But why not earmark a couple billion from the new gas tax (“Energy Freedom” Tax, anyone??) for federally sponsored R&D spending on safe(r) fracking technology.

Seems like that ought to create a few good, high-paying/high-skill jobs (and maybe an entire new industry), while being good for the environment.

Combined with less money for Middle East despots — another byproduct of lower energy costs — that would qualify as a “win-win-win.”