What Would Lincoln (or Teddy Roosevelt, or FDR) Do?
Not What President Obama is Doing

“This wouldn’t have happened if Reagan were still alive.”

–bumper sticker around the time of the Iran-Contra hearings in the 1980’s.

“Better to ask forgiveness than permission.”

Wouldn’t it be great if the President was a Constitutional Law Professor and former Harvard Law Review editor, who could “school” upstarts and demagogues like Texas Senator Ted Cruz on exactly what is and specifically isn’t constitutional? 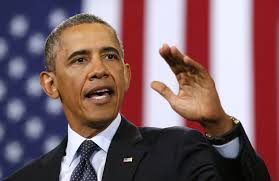 Like reneging on U.S. debt — forbidden by the 14th Amendment.

Or the Republican party gerrymandering something like 100 Congressional districts nationally to lean so preposterously to the right that they now reliably elect mini-Joe McCarthy’s like Cruz (oops, that would be the entire state of Texas).

Instead of letting Cruz take the government to the brink of oblivion — and threatening to do so again just three months from now — how about actually seizing the initiative, and saying something like the following:

“As President, I took an oath to uphold the Constitution.   You, Mr. Cruz, are putting the U.S. at risk of defaulting on its debt.  The 14th Amendment forbids that.  Therefore, I’m going to do what is necessary to pay the government’s debts.  If you don’t like it . . . sue me.”

I read that Cruz, a Princeton grad and Harvard-trained lawyer, has argued cases before the Supreme Court.

He’ll need all his wits to explain why a handful of U.S. Senators (or perhaps just one?) should be able to almost single-handedly hijack the federal government and thwart the clear will of the people.

Phase 2 of this very belated political offensive is for same ex-Constitutional Law Professor to declare war on gerrymandering run amok. 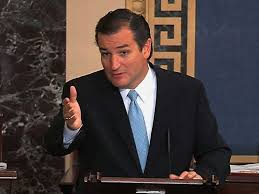 Congressional districts that defy geography — or logic — are an abuse of discretion, and ipso so facto unconstitutional.

How about actually doing something about it — like, putting the U.S. attorney general on the case, and bringing the offending state legislatures to heel?

And if that meant sacrificing the Democrats’ own outrageously gerrymandered districts . . . so be it.

Ahhh, but that would take an aggressive, wily, and courageous leader, whose mastery of the Constitution could be tapped just when the nation needed it most.