“Happy families are all alike; every unhappy family is unhappy in its own way.”

I spent the weekend showing town homes, and all I can say is, it’s hard to get the garage location right . . . and very easy to get it wrong. 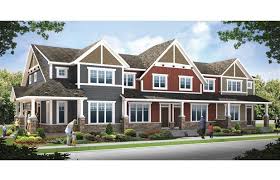 By far the most popular location for newer construction (last decade or so) is underneath, also called a “tuck under.”

Developers love that because it allows for more vertical — and denser — use of space (equals fatter profit margins).

Tuck under garages can also be relatively aesthetic; depending on their design, they don’t mar the town home’s curb appeal the way simply sticking the garage in front can.

The main drawback for owners:  the more vertical use of space, along with multiple half-flights of stairs.

Given that, at least in the Midwest, town homes can draw an older demographic (retirees, down-sizers, etc.), that can be a serious liability.

Which leaves exactly two other places the garage can go:  on the side, and in back.

Too, that guarantees that the two connected units will share a common, interior wall — sometimes between the Bedrooms (another “no-no”).

By default, that leaves locating the garage in back (see photo, above).

Although not all developments have the space (or vision) for that, by far that seems to be the most aesthetic, functional option for owners.