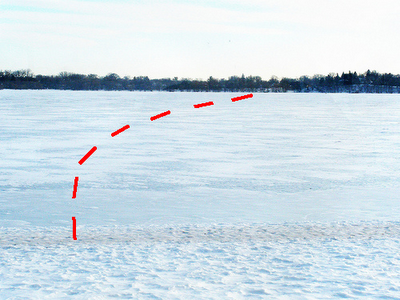 Thinking Outside the Box Inside the Circle

[Editor’s Note:   I like to (re)run this post, originally titled “Winter Walk Shortcut,” on or around the coldest day each winter.  That would certainly appear to be sometime this week, when the high temperature for several consecutive days is forecast to be below zero.]

I definitely prefer walking around Lake Calhoun in the summer-time.

For one thing, the people watching is better — there are more of them about, and, minus the bulky winter clothing, you can actually tell the genders apart.

For another, you don’t have to worry about below zero windchill giving you frostbite.

However, winter walks do have some redeeming virtues.

Like, if you’re running late for something, you can always abbreviate your walk simply by cutting across the middle of the lake!

P.S.:  Pssst!  Don’t tell anyone, but you’re also looking at the world’s biggest off-leash dog park — at least until the March (April?) thaw.