So, I’m not the only one who well remembers one of the best books 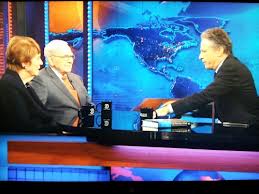 Set in late 1980’s Manhattan, it chronicles life as a “master of the universe” through the prism of one Sherman McCoy, an especially exemplary specimen.

That is, until McCoy’s life suddenly comes undone after he literally takes a middle-of-the-night wrong turn in the Bronx (a mistake that wouldn’t happen today, thanks to ubiquitous GPS software).

Here is how McCoy’s wife, Judy, dismissively explains what her husband does for a living:

“Just imagine that a bond is a slice of cake, and you didn’t bake the cake, but every time you hand somebody a slice of the cake a tiny little bit comes off, like a little crumb, and you can keep that.”

Now, compare that with Mr. Buffett’s characterization of Wall Street on The Daily Show last month:

“We have a huge economy, and people catching the crumbs falling off the table can make a lot of money.”

See what I mean??

And all this was before the “crumbs” had six zeroes after them, not eight or nine (for the math-challenged, a number with nine zeroes is a billion).