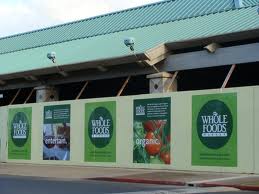 From Desert to Oasis — in 5 Years

Once upon a time — like 2008 — downtown Minneapolis residents had to choose between limited, overpriced corner convenience stores, and jumping in their car to go to a “real” grocery store in the ‘burbs.

Lunds has two stores — north and south — bracketing downtown, and a Whole Foods is scheduled to open roughly in between them on Hennepin next Summer (the site, pictured above, is swarming with construction workers now).

What accounts for the boom in luxury grocery stores?

In a word, demographics.

Specifically, downtown’s population is now well over 25,000, and projected to go much higher.

Best of all:  as amenities downtown improve, they create a virtuous cycle whereby more people want to live downtown, which attracts more grocery stores, restaurants, etc., which in turn attracts even more people.

Long-time Minneapolis residents (I qualify) recall when just across the river from Downtown was a development graveyard.

The area is bustling with new housing, restaurants, and retail (including one of the two downtown Lunds).

Left behind (literally) in the boom:  my favorite low-rent “dive” Italian restaurant, Totino’s, which decamped for a much less expensive (and convenient) Mounds View location years ago (and which ultimately closed).