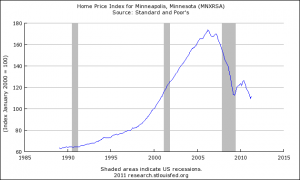 Twin Cities Up 10% Since May

Prices climbed in 19 markets, led by Detroit, up 2.27%; Seattle was the worst-performing market, essentially flat (off .06%).

The Twin Cities ranked sixth, with an increase of 1.19%.

Where the Twin Cities really shines, however, is the last 3 months:  according to Case-Shiller, local home prices are up almost 10% during that interval, ranking 2nd nationally.

P.S.:  with U.S. financial markets closed a second day due to Hurricane Sandy, the Case-Shiller numbers are likely to get more than the usual attention.