OK, so the Twins aren’t playing in the post-season.

And a Richfield Champ’s certainly isn’t a statistically valid sample. 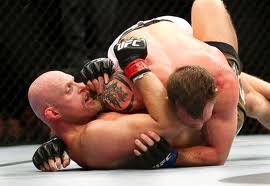 But, it does say something when 18 out of 20 TV’s there were tuned to ultimate fighting tonight, and only one to the American League championship series between the New York Yankees and Detroit Tigers (the 20th TV was tuned to collegiate hockey).

Full disclosure:  I was there with my New York City father-in-law (and die-hard Yankees fan), who wanted to watch the game.

Doubly worrisome for major league baseball:  ultimate fighting is much cheaper programming — sort of like reality TV vs. scripted shows.

And the venues are relatively modest arenas, vs. billion dollar sports palaces.

Oh, and one more relevant fact:  ultimate fighting has a worldwide following — the match being televised was taking place in Brazil.

While a bar full of Minnesotans was whooping it up for ultimate fighting tonight, how many Brazilians do you suppose were simultaneously watching major league baseball??

P.S.:  Baseball doesn’t exactly help its cause with increasingly arcane acronyms and statistics.

Exhibit A:  the batter whose hitting average was given with something called “RISP” (runners in scoring position).