I’m hardly a big boxing fan, but I seem to recall that big fights were 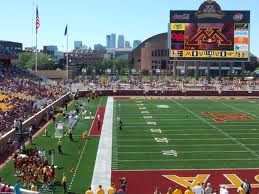 usually preceded by one or more “warm-up” fights, also called “the undercard” — just like movie matinees used to have short films before the main event.

Essentially, that’s what Minnesota’s game vs. Western Michigan is today at 11 a.m. (I’m going to be there).

You’ll know that the Gophers are nationally ranked when their games are scheduled closer to prime time (not that I care — I’m looking forward to sitting outside in the gorgeous weather.  I also prefer the relatively quaint environs of 50,000 seat TCF Stadium, as opposed to Michigan’s 109,000 seat goliath).

P.S.:  “Coach Kill” sounds like a bad nickname for a hyper-aggressive defensive coordinator.