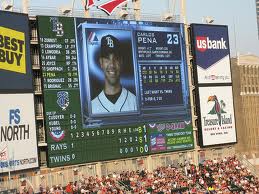 I dare say modern baseball suffers from too many statistics, not too few (try to decipher the almost ridiculously complex scoreboard at Target Field lately?).

But watching a Twins-Royals makeup game last weekend, I saw a play that had no “statistic” to go with it — at least not yet.

With Kansas City batting, and a base runner on first, the batter drove a sharp grounder directly at the Twins shortstop.

However, instead of crisply fielding the ball and initiating a sure double play, he bobbled it, and recovered with just enough time to throw out the batter at first.

Though the shortstop wasn’t charged with an error — he did manage to throw the batter out — the base runner on 1st advanced to second, and eventually scored.

Had the shortstop made the double-play, there would have been two outs, not one, and the inning would have ended when the next Kansas City batter struck out.

How do you capture the foregoing statistically?

Maybe by citing the shortstop a one-half error — sort of like football recognizes a “half-sack.”

Or — at the risk of emboldening mothers (Jewish and non) everywhere — by inaugurating a new defensive category, the “should have” (“should’ve” for short — as in, “the right fielder ‘should’ve” reached the easily caught foul ball”).