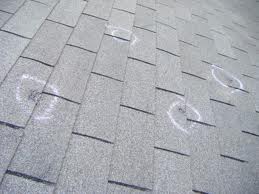 High Likelihood of Getting Busted

It’s NEVER a good idea for a home seller to lie* in their Seller’s Disclosure Statement.

But, it’s especially dumb to lie about hail damage sustained just before closing, even if the Buyer manages to miss it during their final walk-thru inspection (in Minnesota, Sellers have an ongoing duty to update their disclosure through the date of closing).

That’s true not just because new roofs are expensive (around $10k for an average one), but because replacing a roof is a very public, noisy affair.

So, if the seller’s roof sustained hail damage, it’s very likely that the neighbors’ did, too.

When the roofing crews start to descend on the block, fixing everyone else’s roof, how long before the new owners have an insurance adjuster come out to check their roof?

Then pick up the phone to call their agent — and then their attorney?