President Obama’s visit to the Twin Cities this am — apparently, he’s speaking at the Honeywell plant in Golden Valley — is playing havoc with local traffic, at least on the west side of town.

And it’s not just Highway 100, which appears 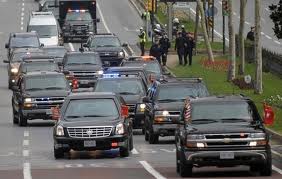 Because of all the detoured traffic, anything in the vicinity of 7 and 100 is also congested.

If you’re going to be 5-10 minutes late for appointments, I suppose there are worse excuses than “I got caught in the traffic jam caused by the Presidential motorcade.”

P.S.:  If you didn’t know the reason for the congestion, you’d initially guess a big accident.

Except that you don’t usually see helicopters when that happens.