OK, so at 350 pounds, NFL prospect Dontari Poe is about 250 pounds too hefty to

resemble a “Hunger Games” tribute — at least one from heroine Katniss Everdeen’s hardscrabble District 12 (he might qualify as a “Career” from District 2 or 3, though).

And, assuming Poe is selected early in the draft, he’s destined for NFL riches, not a gruesome fight-to-the death against 23 peers (actually, there are only 21 other combatants on an NFL gridiron).

But check out his stylist in the photo above, and tell me you 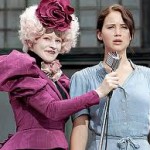 don’t see a resemblance to the various stylists and handlers in aforesaid “Hunger Games” (photo at right, from the movie).

For those who haven’t read the book(s) or seen the movie, the series features a post-Apocalyptic North American country, “Panem,” which stages an annual “Hunger Games” whose teenage participants — two from each of the semi-enslaved 12 districts — are chosen (drafted) in a nationally televised lottery.

In a nod to the Districts’ long ago vanquished insurrection — of which the Hunger Games serves as a reminder — the doomed teenagers are referred to as “tributes.”