I’m in Dallas/Fort Worth this weekend for a family occasion, so that’s the theme of this post.

–The local equivalent of “who’s  buried 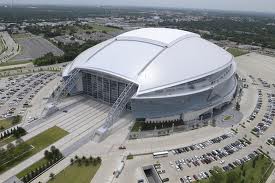 Apparently, enough people couldn’t find it that they felt compelled to re-name the road.

–Want to a know what kind of stadium $1.5 billion buys?

I’m going to find out in an hour, when I take the tour of the new Cowboys Stadium (my 12 year-old son is dying to know, not me!).

From outside, at least, it looks like a giant spaceship landed on the Texas prairie.

Incidentally, $1.5 billion is about what the new Freedom Tower in lower Manhattan is supposed to cost.

I don’t suppose there are any local schools that need new textbooks, sports equipment, or the like.

–With a local temperature in the 30’s and blustery winds, it feels just about as cold as in Minnesota.

In fact, given how mild Minnesota’s winter has been this year, colder.

Who thinks to pack long underwear for a trip to Texas??