If you’ve never been to the Twin Cities, the two largest metro airports are named after the state’s most famous native sons, Charles Lindbergh 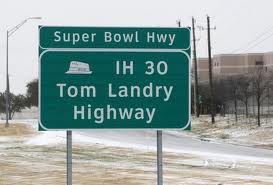 Less than a mile south, there is a “Harmon Killebrew Drive” next to the Mall of America.

But if you’re looking for “Bud Grant Boulevard,” “Fran Tarkenton Way,” or other local tributes to Minnesota sports heroes, you won’t find them (at least that I’m aware).

(In hockey-mad Minnesota, I suppose a better parallel would be “Herb Brooks Highway.”)

Now contrast that with Dallas, Texas (where I just visited).

Sure, the streets near Cowboys Stadium are named after football greats.

But the entire freeway grid appears to be an homage to football and war heroes (plus the occasional local-boy-made-good political giant).

The list includes “Tom Landry Highway,” “Westmoreland Road,” “LBJ Freeway,” “MacArthur Boulevard” — and on and on.

P.S.:  I’d be surprised if there are many (other) major roads nationally named for the most famous general of the Vietnam War (Westmoreland).

And to be fair, Tom Landry — unlike Bud Grant — actually won a couple Super Bowls.