“Buy By the Ton,
Sell By the Ounce”

No, I’m not calling the housing bottom.

But, I’m willing to predict 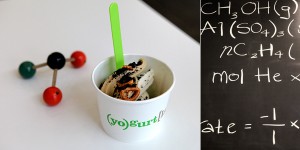 that Yogurt Lab, the new self-serve yogurt shop on Excelsior Blvd. near Uptown, is going to be a hit.

How do I know?

It was mobbed — on a recent weeknight! — when the temp’s were in the single digits.

Just wait until Summer, when (very) nearby Lake Calhoun is actually busy.

While Yogurt Lab’s yogurt was terrific, I was even more impressed by their marketing and business model.

–A spare, minimalist interior that evokes an Apple store.

–A “periodic table” of yogurt flavors on the wall (more faux science!).

–Tinker-toy like models of atoms on each table (very tactile and kid-friendly).

–A business model that minimizes labor (after serving yourself, you bring your yogurt cup up to the front, where the staff weighs it, collects your money — and gives you a spoon.  Note:  each station has two flavors.  As my nine-year old informed me, if you pull the lever in the middle, you get a combination of each).

Perhaps the smartest marketing of all:  a liberal free sample policy, plus charging by the ounce.

Just a heads up if you go with (and are paying) for a larger group, though:  while 48¢ an ounce sounds cheap, expect to drop $20 or so for a family of five.

Curated vs. Non-Curated Reviews, or, “Pay Per (Re)View?”

If you didn’t already know about Yogurt Lab, where would you go to find out?

It turns out that there are “curated” reviews, where the host Web site or company actually screens (in a positive way) what people post.

By contrast, the business model at Yelp! and other online services features non-curated reviews.

Put it this way:  take a look at all the gushing, “six-out-of-five stars” reviews of Yogurt Lab on Yelp!, and tell me that at least a couple of those aren’t ringers posted by confederates or “paid-per-review” types.