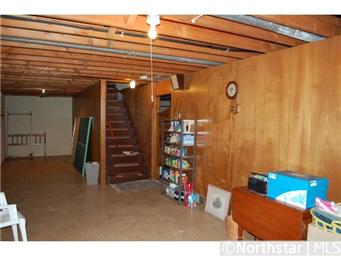 In the stock market, there are periods when the proverbial “high tide raises all ships”:  it doesn’t matter which stock(s) you own, so long as you’re in the market.

When the vast majority of stocks are instead treading water, it’s known as “a stock picker’s market.”

Today’s housing market is like a stock picker’s market.

The people making money aren’t doing it buying-and-holding, and benefiting from across-the-board appreciation.

By and large, there isn’t any.

In other words, they’re going out and creating value, not passively waiting for it to come to them.

A good example of that is this dated-but-solid 1960 Robbinsdale rambler that sold for $88,500 in November (“before” and “after” photos of the basement are at top and bottom, respectively).

The Buyer gutted the house, and put in a new Kitchen, sliding glass doors, and a new deck (that served to open up the huge backyard); finished the basement and added a lower level Bath and egress window; updated the ancient electric service panel, etc.

The new-and-improved house came on the market scarcely a month later, on Dec. 27, and sold just 8 days after that.

It’s now “Pending” on MLS, and projected to close at the end of January. 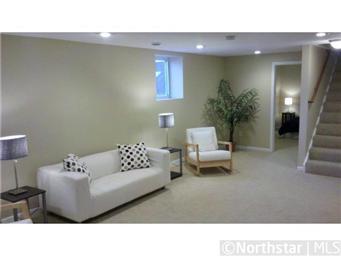