I thought George Clooney’s The Descendants was a terrific movie — the best of the year, in fact. 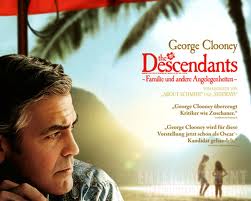 So, I’m not going to give away the plot, beyond noting that real estate figures prominently in the engrossing story.

Specifically, because of something called “The Rule Against Perpetuities,” the trust run by Matt King (George Clooney’s character) must sell 25,000 acres of prime Kauai property that has been in the King family (“the descendants”) for more than 150 years.

What King ultimately decides — and how he arrives at his decision — is one of the central arcs of the movie.

It’s been awhile (like, 20 years!) since I took Real Property in law school, but yes, there really is a legal principle called the Rule Against Perpetuities, and yes, it does operate the way the movie says it does (at least, as far as I remember).

Happily, you don’t have to know a thing about real estate law to appreciate this fine movie.

P.S.:  one of the few, off-beat notes was that Clooney’s character would live in a multi-million dollar home (however understated), yet tool around in an ancient Honda Accord.