The “RoboCop Solution” to the Financial Crisis

When it comes to holding the citizenry hostage, owners of pro baseball and football franchises have nothing on Wall Street. 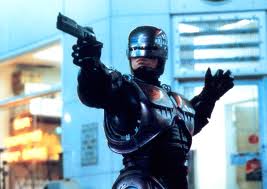 The former, of course, have refined to an art form the practice of extorting tax dollars from cities and counties to build ever more expensive (and grandiose) sports palaces.

“Give us what we want or we’ll move the team someplace that will.”

Ironically, thanks to the Wall Street-engineered financial bust, that threat doesn’t pack the same punch today.

That’s because broke cities and counties are much less inclined to get into bidding wars attracting other cities’ pro sports teams.

What’s any of this got to do with Wall Street?

When the too-big-to-fail banks face an existential crisis like they did in 2008, they can go to the government — the people, in a democracy — and credibly say, “if you don’t give us what we want, we’ll crash and take the financial system down with us.

Your savings will disappear, your checks won’t clear, and your retirement accounts will wither.

“Oh, and you’re likely to lose your job, too, because the company you work for won’t be able to get short-term financing and will fail.”

Defusing Wall Street’s “Or Else”

So, what’s the best way to transform such a threat into a hollow bluff?

Take away Wall Street’s control of the financial system.

In other words:  fire it.

In the 1987 movie RoboCop, the title character — a futuristic half-man/half machine — is powerless to apprehend the corrupt police chief because his software programming forbades his acting against a superior.

In the movie’s climactic showdown, the Mayor turns to the police chief and removes that impediment with this, three word instruction:  ‘Dick, you’re fired.”

In the next instant, RoboCop blasts the police chief through the high-rise boardroom’s wall of windows (and into kingdom come) with a hail of bullets.

Once Wall Street’s grip on the financial system has been released, step #2 is undertaking genuine, systemic reform aimed at reducing the very real risk of financial contagion.

That means making the too-big-to-fail banks smaller; reinstating Glass-Steagall and its firewall between investment and commercial banking; and regulating (or better yet, banning) credit derivatives (Warren Buffett’s “financial weapons of mass destruction”).

Throw the 100 Wall Street executives most responsible for the crash in jail, along with their enabling boards of directors.

P.S.:  The foregoing a little too graphic?

Consider this post instead:  ‘A Financial Gettysburg Address,’ from almost two years ago.