OK, so it’s not an Unidentified Flying Object, or even airborne.

But, I’m sure it’s had at least a few Twin Citians (“Twins Itian’s?) scratching their heads the last few days, trying to figure out exactly what they were looking at (see photo, below).

“It” is a very large, very dramatic, four-peaked big-top tent in the parking lot just southwest of 394 and 100 in St. Louis Park (Rainbow and Costco are just to the west).

As opposed to . . . some local version of the Mormon Temple in Salt Lake City (my first association, above), or, the Coen Brothers were back in town filming a new movie.

As this link makes clear, the tent is actually the (portable) stage for Cavalia, a hybrid circus/Cirque du Soleil 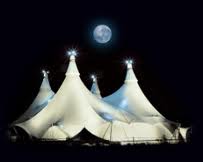 Throw in a little “Blue Man Group,” and I’m there! (especially if they give out complimentary tix for free plugs 🙂 ).

The shows are supposed to run from mid-Sept. through October.