I’ve probably been to two dozen or so major league baseball games in my lifetime, but until this summer I’d never seen fans, umm . . . “regurgitate” an opposing team’s home run ball. 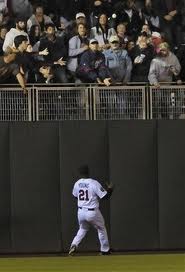 After a Tampa Ray homered into the left field stands at Yankee stadium earlier this month, there was a low rumble, followed by the home run being tossed back onto the field.

And this in a game the Yankee’s were leading by seven runs.

Now, compare that to Twins fans.

In Minnesota, if you catch a ball — any ball — it’s “high fives” and handshakes, all around.

And no sharp elbows going for the ball:  at last night’s game against Detroit, I even saw the person who ended up with the ball surrender it to their overjoyed neighbor.

P.S. :  But, how do you know the ball thrown back onto the field was the actual home run ball?

Think anyone sitting in the outfield stands at Yankee Stadium brings a ball with them to the game, just to have a “spare” to throw back (and satisfy the clamoring fans) in the event they catch a home run?