They Know About Kindle, Right?

One of the cheesier ads currently on display in New York subways — and it’s a crowded category, pun intended — is an ad that blares that there are “26,543 Reasons to Attend Our Community College.” 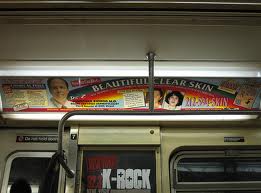 The number of books in the College’s library.

They do know about Kindle, right?

Prospective students should also know — but probably don’t — that a junior high school library stocks about that many volumes.

Unless several of them are written in longhand by Leonardo Da Vinci, that’s nothing to  . . . um . . . write home about.

The foregoing would just be a good example of an especially dumb ad, but for the fact that so many 20-something’s are now exiting mediocre institutions and online diploma mills buried in debt — debt that’s often traceable to the federal government, either directly or in the form of loan guaranties.

Exacerbating that debt load:  it’s getting harder and harder to discharge (I believe student loans are either already non-dischargeable under bankruptcy, or headed that direction).

How do you get a good jump off the job market starting line, when you’re dragging a financial ball-and-chain?

Truth-in-advertising for fast food restaurants is disclosing the calories for each menu item.

For the tobacco companies, it’s conspicuously disclosing the health risks of smoking.

For the diploma mills . . . it’s being forced to disclose the employment statistics of their graduates.