Why is This Man Still Collecting Speaking Fees? 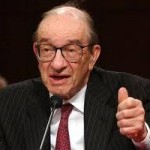 About to turn 85 next month, it’s not that he isn’t old enough.

And, after all these years of lucrative consulting and speaking fees, it’s not exactly like he needs the money.

So, why is Greenspan spending his time going around the country giving talks to finance-related trade and industry groups, instead of lounging by the pool or doting on his grandchildren?

Because then there’d be no one to peddle his revisionist history of the 2008 financial crash.

So, according to Greenspan, the financial and real estate melt-down that ushered in TARP, ZIRP (“Zero Percent Interest Rates,” or really ZIRP II), millions of foreclosures and trillions in fresh U.S. debt was an unforeseeable “perfect storm”  that roils the economy once every one hundred years or so.

Neatly omitted from this story line:

–The role that zero percent interest rates — courtesy of the Greenspan-led Federal Reserve — played in creating and driving liquidity into the housing market.

–The role that Wall Street played in satisfying investors’ demand for yield by creating rivers and then oceans and then still more oceans of securitized debt tied to housing.

–The role that the credit rating agencies played in blessing all that crap as Triple-A paper.

–The role that credit derivatives — purposely unregulated at Greenspan’s and others’ behest — played in magnifying the losses when they inevitably came — and allowed, obscenely, insiders who profited from selling securitized crap to profit again when it inevitably collapsed.

–The role that nosebleed Wall Street leverage — OK’d by none other than the SEC and quietly blessed by Greenspan — played in necessitating Wall Street’s multiple bailouts.

Nah, according to Greenspan, it was a 100 year storm that nobody could have predicted or prevented.

So, Mr. Greenspan, if you really believe so strongly in your explanation(s) for the crash, why not engage in some real give-and-take with your (hand-picked) audiences?

Why insist that all questions be submitted in writing in advance, and not allow any Q&A afterwards?

P.S.:  Even scarier than the prospect of Greenspan selling his counter-narrative is . . .  seeing people who should know better letting it go unchallenged.