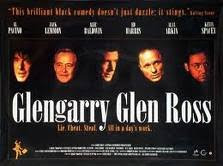 In the mood for a good movie about real estate (as I was the the other night)?

Either a good movie, or about real estate (oddly enough).

Instead, the 1992 movie — adapted by David Mamet from his Pulitzer Prize-winning play — is about the cutthroat environment and high pressure sales tactics employed by the denizens of a nondescript boiler room (and the human costs of same).

After about 30 minutes or so, it grew tiresome and I turned it off.

Alec Baldwin and Kevin Spacey round out the stellar-but-squandered cast.