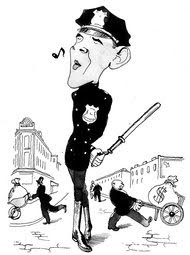 The Necessity of Choosing Sides

The guerilla wins if he does not lose. The conventional army loses if it does not win.

What does Kissinger’s famous maxim about guerilla warfare have to do with Barack Obama and Wall Street?

That in every great engagement, there are always two battles being waged: the real one, and the one over people’s perceptions.

It’s this latter war that Barack Obama is losing badly vis a vis Wall Street (although the real war — to tame and hold Wall Street to account — ain’t going so great, either).

The New York Times’ Frank Rich cuts to the quick of Obama’s problem:

Since Obama has neither aggressively pursued the crash’s con men nor compellingly explained how they gamed the system, he sometimes looks as if he’s fronting for the industry even if he’s not. Voters are not only failing to give the White House credit for its economic successes but finding it guilty of transgressions it didn’t commit.

President Obama, time to (re)read your Machiavelli (and Kissinger).

P.S.: best line from “Inside Job,” reviewed on this blog previously: asked why there’s been no systematic investigation of the 2008 crash, economist Nouriel Roubini answers: “because then you’d find the culprits.” Graphic (above) from NY Times.
0Shares