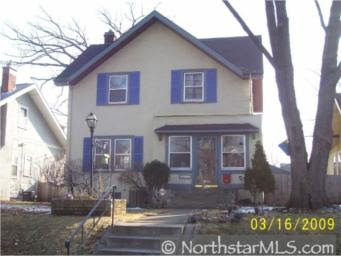 Where: 46xx 1st Ave. South in Minneapolis
What: Bank-owned (foreclosure) 3 BR/2 BA 1917 stucco home with 2,000 square feet.
How (much): asking price — $72,900; sold price — $130,000
When: listed — 4/19/2009; closed –8/18/2009
In my post yesterday (Seller’s Motivation: Is it Relevant?”), I made the case that the Seller’s motivation (usually) isn’t nearly as important as most prospective Buyers think it is.
Often times, neither is the Seller’s asking price.
At one extreme, Banks selling foreclosures have been known to price ridiculously low to foment bidding wars (at least, you’d assume it was purposeful; the other alternative is that they truly have no clue. Hmm . . . ). See Exhibit A (above).
At the other extreme, lots of Sellers today have been known to pick asking prices that reflect, shall we say, “wishful thinking.”
Either they’ve been in their home for decades, and are genuinely oblivious to how dated it has become, or, they feel the need to “pad” their asking price, to give themselves “negotiating leverage.”
Unfortunately, that’s not how it works.
Realtors (and appraisers) know that home prices are set exactly one way: by identifying the 3 best Comp’s (similar, nearby homes that have sold the most recently), then doing a detailed compare-and-contrast between the subject home and each of the Comp’s to arrive at an adjusted value.
0Shares