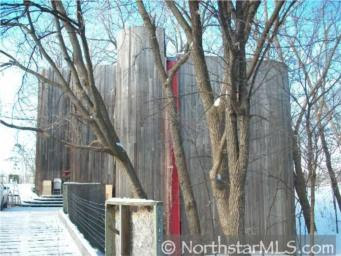 What: 2,500 sq. foot. contemporary overlooking the lake
How (much): list price is $247,900
When: (re)listed January 22
Who: co-listed by Teams International and RE/MAX Associates
You could easily spend $1 million-plus (still) for a home overlooking Cedar Lake in Southwest Minneapolis.
So, it’s attention-getting when a home just off the lake is for sale for only $248k — down from $549,000 when it first hit the market in October, 2008. That’s less than half(!) the $522,500 tax assessed value.
So, what’s the catch?
It turns out that there are several.
They include a wood exterior that’s in such bad repair that mold is evident on several interior walls; a plastic swimming pool — practically full — positioned below a major roof leak (one of several that were visible); and an incoherent floor plan with only one bathroom in the whole house (and that practically in the middle of the Kitchen).
So, it’s a pass, right?
At least for my client.
However, even if the house is a ‘goner — likely in my opinion — the land alone is still worth the asking price.
Apparently, someone else agreed: the listing agent’s front desk said the bank-Seller (a shock, I know) has just accepted an offer.
0Shares