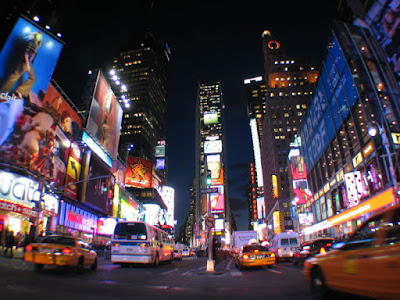 I’ve seen the future of online news . . . and it looks a lot like Times Square: one big, blinking, scrolling, flashing mass (mess?) of images and text.

Unlike the newspaper, which is organized much more “vertically,” the newspaper-less can only present one, “horizontal” screen at a time.

To see what’s behind (under? below?) the home page, you have to proactively look for it, by clicking on links, navigating multiple tables of contents, and “drilling” down ever deeper into the site.

Perhaps that’s why online news is trying to become increasingly dynamic: so that you, the Reader, can be more passive.

Now, when you land on the home page of The New York Times, Star Trib, etc, you encounter a series of captioned photos attached to articles, ranked by their “newsworthiness” (at least according to the editor). Just like on the photo-sharing sites, the home page automatically scrolls through them.

Along with that dynamism are more interstitial ads — the kind that interpose themselves in between screen captures, and hold you hostage for three seconds (or was that five?).

Whereas you used to be able to click on a “close” or “skip this ad” button to remove them, the button is getting progressively smaller (no doubt on its way to disappearing altogether).

So, the ads now intrude mid-article, either obscuring part of the text (the ads move!) or interrupting it completely.

With all those blinking, scrolling images competing for your attention, interrupted by “targeted” ads . . . it makes you just want to pick up an “obsolete” newspaper.

P.S.: one of my favorite comic strips about technology is from “Family Circus.” It shows one of the kids excitedly yelling from the grandparents’ guest bathroom: ‘Mommie! Daddy! It’s a toothbrush you don’t have to plug in!’