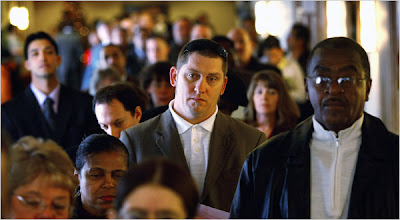 Regular readers of this blog are already familiar with all the ways I believe this country has been weakened, especially financially, by Wall Street greed and recklessness (again).

But there’s one way — surprisingly un(der)remarked — in which I think this country is immeasurably stronger than it was 20 years ago — or 100.

That’s in the realm of race relations.

The election of Barack Obama, the nation’s first African American President, would seem to mark the beginning of the end of a centuries-long rift between Whites and Blacks in this country — the healing of what many call “America’s original sin.”

Instead of “white America” and “black America,” it feels like there’s now just one America (at least when it comes to race).

As a 50 year-old, middle class white male, I don’t presume to speak for African-Americans, and whether or not they experience less racial prejudice today.

And there’s no denying that African Americans as a group are (still) less well off than their white counterparts, according to virtually every measurable gauge there is (employment, income, life expectancy, educational achievement, etc.).

And still . . . somehow the tone in race relations seems different: the grievances less intense, the hopes a little brighter.

There’s a new status quo, I submit, only when everyone takes it for granted.

So, it’s reassuring that nowhere in the opprobrium heaped on Tiger Woods the last few weeks is there a whiff of racial invective (at least I haven’t detected it). And no, I don’t think it’s because Tiger is also part-Asian.

The biggest risk to this country now, as I see it, just as it is finally healing a centuries-old fissure between White and Black, is the prospect of a new divide — equally deep and profound — threatening to split it into two again.

Rather, it’s the divide between all the financially struggling Americans — White, Black, and Other — and the financial elite on Wall Street who effectively run the country (or at least its finances).

So, maybe we owe Wall Street a debt of gratitude (on top of the very real trillions we owe because of it): it’s united everyone against it.