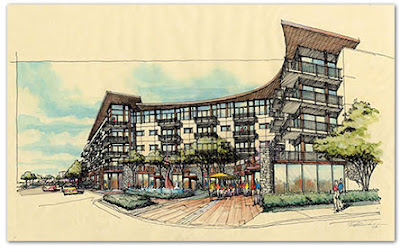 [Editor’s note:  this piece was originally posted last weekend.  I’m “popping” to the top of the list because it was lightly read before being buried by subsequent posts.  If you read it then, please just skip.]

It’s time to accept that home ownership is not a realistic goal for many people and to curtail the enormous government programs fueling this ambition.

Five years ago, the project (pictured above) now taking shape at Excelsior Blvd. and France Ave. in St. Louis Park, called “The Ellipse on Excelsior,” would have been condo’s.

Across the Twin Cities, there are countless more examples of the housing pendulum swinging from condo’s back to rentals.

I think there are three factors:

One. It’s easy to forget, but there were thousands of condo conversions locally from roughly 2002-2006.

Outfits like Financial Freedom Realty are long gone, but they effectively drained a good chunk of top-tier apartments from desirable neighborhoods near the City Lakes (unfortunately, then they kept going, and started converting increasingly mediocre apartments to condo’s).

So, in a sense, the new rentals being built now are merely replacing inventory that was previously lost.

Two.  Setbacks in the stock and housing markets have left many people — particularly older people — gun-shy (if not shell-shocked) about holding big-ticket assets.

By contrast, renters don’t have to worry about the value of their assets tanking. Nor do they have to worry about not being able to move when they want, because they can’t afford to write their mortgage company a big check at closing (I’ve yet to hear of an “underwater” renter).

Unfortunately, avoiding an asset class after the bust smacks of “buying high and selling low.”

Three. New rentals are what the banks are financing.

Which really just begs the question: ‘why?’

Because there’s demand for rentals, while condo sales are soft.

I think Sugrue and others are wrong that renting has replaced owning as “the new American dream.” Just as “no one washes a rental car,” no one takes the same pride in a home that isn’t really theirs.

Rather, the mindset of the “rental converts” I know is that they simply want less risk in their lives, and to be off the financial roller coaster.

But Sugrue is right that single family ownership has been the beneficiary of a welter of government programs, dating back to the 1930’s, that have collectively stimulated demand for housing.

Removing those, whether for financial or philosophical reasons, would make home ownership less attractive.

P.S.: I always thought a more fitting name for “Financial Freedom Realty” was “Financial Slavery Realty.” At least, that’s what I’d call owing more on your mortgage than your condo is worth, and not being able to afford to move.